Werder Bremen have kept their dream of playing in Europe next season alive with the victory over Hertha Berlin at the Weser Stadium. 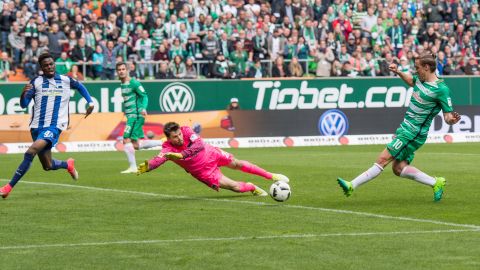 The youthful Hertha side were expected to pose a serious threat but Werder scored their first after less than ten minutes of play.

There was a set piece and Hertha sent in too many players, leaving their defences vulnerable. Bremen put up a counter attack with Max Kruse and Fin Bartels combining for the opener.

Both players combined again to get the second goal six minutes after their first. This time Kruse was the one that scored as Bartels fed him. A poor clearance from keeper Rune Jarstein saw Bartels capitalize and Kruse had an empty net in front of him.

As the game went on Robert Bauer and Max Eggestein made attempts but it failed to hit their mark. Hertha had a chance but Vladimir Darida sent it over.

After the break, both sides kept attacking with Zlatko Junuzovic getting close for the hosts and former Chelsea player Salomon Kalou sending his chance to the side netting. Werder had a chance through substitute Thomas Delaney around the 70th minute but his cross was sent over the bar. Bremen’s defences remained resolute as they sealed all three points.

Kruse was voted the best player in the game. His display followed his four goal tally against Ingolstadt last week. The player has been touted as one of the prospects Joachim Low should consider for Free Bets Now the national team as the 29-year old continues to impress.

Werder Bremen are sixth with the result and within a point of Hertha Berlin. With tough fixtures against Cologne, Hoffenheim, and Borussia Dortmund, Weser would have to work hard to secure continental status next term.